My Boyfriend Only Contacts Me Every Couple of Days. Am I Overreacting?

I started seeing this guy in November, we were acquaintances and reconnected via online dating. When we started dating late last year, everything seemed like a great fit. Similar interests, serious physical attraction, and good, balanced and honest communication got us through the first month. Since then, however, there’s just been a lot going on for both of us. Between weeks of solo travel, getting swamped with work, and going through multiple serious personal tragedies and losses, we still found time to go out on legitimate dates and dinners and eventually we became intimate.

At the end of February, we had an honest conversation and discovered that we were both still dating around. I’m still going on dates with others because I don’t want to rush into a relationship after how serious and heavy my last relationship was, and he said he hadn’t planned to be in anything serious when he met me and needs time to get there. We discussed this reasonably and I felt good about the outcome. The next day, I went out of town for a week and didn’t hear from him. The day I got back he reached out and said he missed me, but the month flew by and we barely saw each other thanks to our hectic schedules.

Now I’m itching for exclusivity. We have a lot of fun, we get along great, we support each other, and we still have serious chemistry– but I really only feel this when we’re physically in each other’s presence.

You always say believe the negatives, ignore the positives. And I feel as though my only negative, based on your guidelines for future boyfriends, is that he doesn’t contact me daily. I never feel as though he’s forgotten about me or is pulling a disappearing act. However, he only initiates texts or sends emails every couple days and has slowed down on phone calls. I’m busy enough to not be waiting by my phone, but I’m not so self-assured that it doesn’t hurt me. I rarely reach out, because I’m taking your “just say yes” advice. Since the start of our relationship, I’ve called him only 4 or 5 times. I initiate texts maybe once a week. Is it possible that I am taking your advice too far or is he disinterested and unavailable?

I have a handful of philosophies which I trot out from time to time on this blog.

One, as you said, is to “do nothing.” By not taking the initiative — and not reminding him that you’re alive and waiting for him – you get to see whether he’s truly into you. A man who is into you calls, plans dates, keeps in touch in between, commits, and makes you feel valued as a girlfriend. A man who is not into you doesn’t do these things.

That brings me to my other philosophy, “men do what they want.” I’m surprised at how often we can forget commonsense things like that. It’s almost as if your emotion is clouding your judgment. It’s almost as if what you WANT to be true is superseding what IS true. Actually, it’s exactly like that. As a result, women stay in dead-end relationships with men who don’t call them, commit to them, or talk about a future with them.

You’ve known this guy since November and he’s still not your boyfriend. Wouldn’t that be a good indication that he doesn’t want to be your boyfriend?

So why wouldn’t a man call, commit, or talk about a future, Darlene?

Because he doesn’t WANT to.

So when you say that your only negative is that he doesn’t contact you daily, you’re whitewashing what’s patently obvious to any casual observer:

You’ve known this guy since November and he’s still not your boyfriend.

Wouldn’t that be a good indication that he doesn’t want to be your boyfriend?

I mean you can — and will — come up with excuses and justifications, some of which are partially valid. You didn’t want to get serious after your last relationship. He was looking for other women online while he was sleeping with you. Weeks can go by without seeing each other. Objectively, it would seem like this guy is not highly motivated to take you off the market and claim you for himself. Objectively, it would seem like this guy is either not emotionally available to anyone, or that he simply doesn’t like you enough to be his exclusive girlfriend. 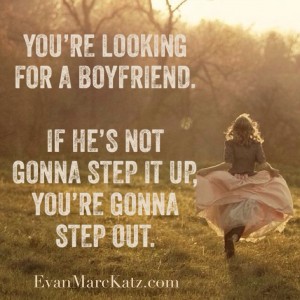 Your next move is to tell him the truth: you’re looking for a boyfriend, not an occasional texting buddy, dinner companion, and sex partner. If he’s not gonna step it up, you’re gonna step out. (Tweet this quote!)

Sadly, I predict that’s exactly what will happen.

Oh, and by the way, don’t have that (or any other serious relationship) conversation via text. Talk to him like an adult, and maybe he’ll respond like one.

Discover what men are really thinking so you can finally date with joy and confidence.
356 Shares
Tweet
Share356