Do You Stay or Do You Go?

If you’ve ever asked yourself how long you should wait, or how much you should put up with from a man, this blog post is for you.

In fact, I’m going to give away, in the next 1000 words, the fundamental principle that I use for all of my dating coaching clients.

If you are dating and routinely questioning your own judgment with men, I can help.

What I want to talk about today is a phenomenon that comes up all the time in dating coaching: how do you know what behavior to tolerate from men?

As a man, I wasn’t sure I could be entirely objective about this… not until I learned that I have much better radar than most of my women clients.

Colleen went out with a man who lied about his age by 8 years, and then complained on the first date that he hadn’t had sex in 2 years. He couldn’t stop talking about how unfair it was to be an older man who wanted to sleep with younger women.

The thing for you to distinguish is whether a man is having a bad moment, or whether he’s a bad man for you. They’re two different things, entirely.

She was going to give this man a second date!

Michaela was corresponding with a man online. He told her he was going to make plans with her, and then disappeared without a trace. He came back two months later and did the same thing a second time. Then he came back a THIRD time.

She gave him another shot. He disappeared AGAIN.

So when I’m talking about how my radar is better than yours, it’s not because I’m smarter or more experienced…it’s because I’m a MAN.

And, as a man — a self-aware, moral man who always sought love – I can tell you if it’s a forgivable offense, or if you should cut him loose right there.

I am, in no way, an apologist for men.

I’ve done plenty of things that SHOULD have gotten me cut loose, but didn’t…

And I’ve done plenty of things that SHOULDN’T have gotten me cut loose, but did.

The thing for you to distinguish is whether a man is having a bad moment, or whether he’s a bad man for you. They’re two different things, entirely.

We ALL have lapses when someone could judge us harshly.

Imagine you were out with a man and you got on the topic of dating. And, somehow, organically, he asked you about your ex — the one who cheated on you with your best friend. It’s still raw, it’s still painful, and you never did forgive him.

And because your date is so cute and such a good listener, you feel comfortable telling him the truth about your ex — that he was really a jerk, who completely disappointed you and destroyed your trust in men. You share how you’ve tried to get over him for two years, and although you occasionally check his Facebook page (don’t we all!), you’re finally ready for a real, healthy relationship.

Would you be surprised if this guy said to himself, “Whoa! This woman has some serious relationship and trust issues, not to mention a lot of unresolved anger towards men. I think I’m going to pass on her.” No, you would not be.

But he’d also be missing out on you — smart, attractive, kind, wonderful you — and all because you were honest about your conflicted feelings towards your ex.

Wouldn’t it be a shame if you got judged for that one minor lapse on the date?

Yeah, it’s the same thing for us.

We’re not perfect gentlemen.
We’re not mind readers.
We usually say what we think — even if you don’t like it or agree.

We want to have sex but we also want to find love — and we want to do it at our own pace.

And sometimes, because we are independently thinking creatures, we’re going to do something that really pisses you off.

Commenting on another woman’s looks.
Moving too fast sexually.
Failing to do something you want, like picking up a check, opening a car door, or figuring out our future instantly after date 1.

These may be bad moments; they are not necessarily bad men.

You are entitled to break up with a guy who does these things, in hopes of finding a man who never, ever pisses you off…but that’s the wrong kind of calculus.

I know lots of men who flirt with other women, move fast sexually, and fail to intuit every womanly need you have. That’s because I’m one of those men.

And the only reason I get to give advice to you is because I had SO much experience and SO much feedback that I was better able to learn how to please.

The couples that make it are the ones who don’t sweat the small stuff; and don’t tolerate the big stuff.

Even today, as someone who coaches women in understanding men for 4 hours a day, I STILL do things that makes my wife cringe. I’m grateful that she sees the good in me, rather than focusing on the bad.

So what shouldn’t you put up with?

The couples that make it are the ones who don’t sweat the small stuff; and don’t tolerate the big stuff. But those aren’t always obvious.

A guy who finds other women attractive doesn’t necessarily have a character flaw. He’s a man. He’s attracted to other women. But if he’s going home with you, you probably shouldn’t care too much. 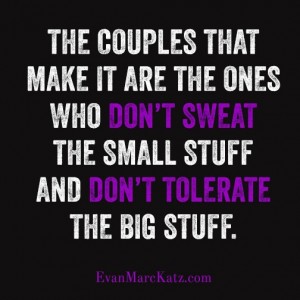 </divIt’s the man who ACTS on his flirtatiousness — who has strange women sitting on his lap, who gets phone numbers, who exhibits blatant unfaithful tendencies — that’s the guy you drop like a bad habit.

The man who moves too fast sexually is also known as…a man. If he wants to have sex, he’s acting in his own self-interests, just as you are by denying him. You need to let him know that you’re attracted to him, that you’re working at your own pace, and that if you reach the point where you’re in a committed relationship, you’d love to sleep with him.

The man who refuses to accept this explanation, that’s the guy you dump.

The man who keeps his online dating profile up after a great date isn’t necessarily a bad guy. It means he’s popular and he’s keeping his options open — just like you. So forgive him if he doesn’t cut off all the other women in his life within the first few days of meeting you.

By the same token, if you’re seeing him for 8 weeks, and he’s not escalating his efforts to commit to you, the writing’s on the wall. Leave him.

See, it’s easy to blow up every behavioral misstep as a larger pattern. Especially looking backwards on a failed relationship.

But the couples that make it are the ones who don’t sweat the small stuff; and don’t tolerate the big stuff.

The big stuff is how kind and consistent he is to you. The small stuff is everything else.

Do that, and you can be your own dating coach.

Discover what men are really thinking so you can finally date with joy and confidence.
387 Shares
Tweet
Share387