Home > Blog > Marriage > My Husband Had a Stripper at His Bachelor Party and I’m Still Angry! 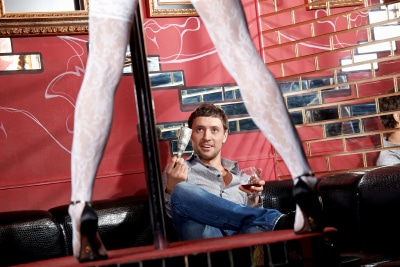 I’ve been married for just over 3 months. Prior to marrying my husband, he had a bachelor party. His bachelor party consisted of the men partying and watching football, and then eventually retiring to his friend’s house for 2 full nude strippers in a show. My husband came home completely messed up at 4am.

The issue is that he did not make me aware of the strippers. Later, I saw him bending over and on his ass was a bunch of permanent marker. BUSTED! He kind of came clean, but the timeline of his story and his lack of details make me think it’s worse than I know. He refuses to discuss it with me. Not to mention that when he came home at 4am, he had sex with me. I feel a little used.

Now, 4 months later, I’m still hurt by it and it eats at me that I have no idea what happened with 2 fully nude strippers in his friend’s house or why he would end up home at 4am instead of either a more reasonable time or the next morning. Seems fishy… not to mention he doesn’t even recall having sex with me when he got home.

I’m doing my best to let that go but now we have another friend’s wedding where he is a groomsman. Which means another bachelor party! So, my anxiety is at an all-time high. I’m almost leaning toward telling him if they get private strippers, I will be getting a private massage from at least 1 male therapist, and if they go to a strip club, not a big deal, I’ll stick to a reputable storefront for my massage! Is that unreasonable? Do I seem like an uptight wife? I’m just utterly grossed out by thinking about a nude girl or two rubbing on my man’s crotch! And I’d think he may get a little crazy thinking about a muscular stud rubbing me down with massage oils, so it seems fair, no? —Katherine

I’ve talked about men and their visual proclivities before: namely, here, here, and here.

I’m not positive I have anything new to say on the topic, so I’ll just do my best to dissect your email to me:

This means that you’ve had 2-3 years to date him. You know who he is. You either trust him or you don’t. I would be surprised if he proved to be a completely different human being after you got married.

2. He had a bachelor party with strippers, got hammered, and blacked out.

Certainly not his proudest moment. But is this a pattern with him? Or is it an anomaly — say, something that has never occurred before but only happened at his bachelor party?

If it’s a pattern, I don’t know why you married him. If it’s an anomaly, it’s probably something to write off.

3. He did not make you aware of these strippers.

And if he did, this all would have gone a lot better?

4. There was marker on his ass.

This is more embarrassment from the same bachelor party. It shouldn’t be an additional demerit. If anything, he’s probably ashamed of himself.

5. You feel used because you had sex with your husband.

Why? He’s your husband. Isn’t that what wives do with husbands?

Was it bad? Did you not get off? Or are you just sensitive to the fact that someone else worked him up and you were the one who got to benefit from it?

6. It’s 4 months later and you’re still thinking about it.

7. He came home at 4am instead of spending the night out.

Yeah, let me know when it’s a good plan for a man to not show up at home after his bachelor party.

8. Your response to the next bachelor party is to hire a male masseuse.

Um, okay. And he should worry about this because…?

You’re jealous and you feel you’ve been wronged.

I can’t convince you of the latter. But I hope you can acknowledge the former.

If he didn’t cheat on you, there’s nothing to worry about, is there?

If he did cheat on you, then you married a man of poor character. Sorry.

But just because he had a drunken bachelor party doesn’t mean he cheated on you.

Thus, you have two choices: trust him and let this sordid night be filed away as a distant memory. Or keep up this worry, paranoia, jealousy, and tit-for-tat game and see where that leads you.

Sure, you can put your foot down and forbid him from going to a bachelor party where there are strippers.

Just know that telling your husband what he’s allowed to do is rarely a winning strategy.

My advice for you is to let him know that you know you’re being a little thin-skinned but his bachelor party made you feel bad. All in all, you trust him. You love him. You are just sensitive about this kind of thing.

Then listen to his explanation.