Why You Should Marry Your Best Friend

Does it seem like I post a lot of things on the virtues of marriage? I think so, too. But people are always sharing links with me, I am always reading them, and I am eager to share with you all the things that I learn.

The latest study, by the National Bureau of Economic Research, is a breakthrough, because it not only illustrates that marriage makes people happier, but controls for pre-marriage levels as well.

“It concluded that being married makes people happier and more satisfied with their lives than those who remain single — particularly during the most stressful periods, like midlife crises.

Even as fewer people are marrying, the disadvantages of remaining single have broad implications. It’s important because marriage is increasingly a force behind inequality. Stable marriages are more common among educated, high-income people, and increasingly out of reach for those who are not. That divide appears to affect not just people’s income and family stability, but also their happiness and stress levels.”

Not surprisingly, it’s not about the piece of paper, but the intertwined lives that impact happiness.

I never thought of myself as an unhappy person before I got married. But I did find being single to be stressful. I had to make all of my own plans, reach out to guy friends, plan my own dates, fill up my life with stuff to do. That isn’t inherently a bad thing – as this is exactly the way LOTS of single people WANT to arrange their lives – 100% on their own terms.

But pretty much every study ever has indicated that deep, intimate relationships provide more joy than anything. People who have them report greater happiness across the board. And while one can have a bunch of close girlfriends, it’s very different than having a spouse. Says the article:

“Those who consider their spouse or partner to be their best friend get about twice as much life satisfaction from marriage as others.” 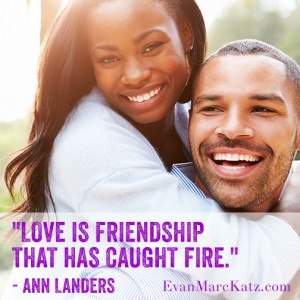 Not surprisingly, it’s not about the piece of paper, but the intertwined lives that impact happiness. As such, people living together also had the same spike in happiness as married couples. “Women benefit more from being married to their best friend than men do, though women are less likely to regard their spouse as their best friend.”

“What immediately intrigued me about the results was to rethink marriage as a whole,” Mr. Helliwell said. “Maybe what is really important is friendship, and to never forget that in the push and pull of daily life.”

All the more reason to continue to pursue love, and to pursue it with a man who is truly your best friend.

If your relationship is making you feel anxious, you must learn these 8 reasons why.
54 Shares
Tweet
Share54