Should Women Write to Men? 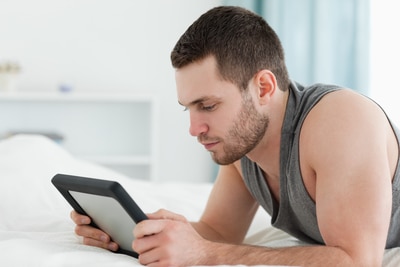 I just read your post regarding internet dating. Very interesting points you make and I agree with most of them.

Here is my question: Are men ok with women sending introductory emails to them? I am very confused about this point. In some ways, I see a email hello similar to a come-hither look at a bar, etc. but in other ways it seems very aggressive and therefore a turnoff to most men. I would love your thoughts on this.

Your question brings up two of the most common mistakes that women make in online dating:

Men LOVE it when women write to them. It makes their lives so much easier. If you have an attractive photo, interesting essay, and you’re in his target demographic, why WOULDN’T he be excited to hear from you? You may be on his Favorites list but he hasn’t had the opportunity to contact you yet. So yes, Jane, don’t hesitate to contact that guy you’ve been eyeing. There is nothing inherent about initiating an email conversation that screams out “desperate”. However…

Where most women screw up that first email contact is by taking one of two approaches: 1) telling him how great he is, or 2) explaining why you’re great and why he should write back to you.

“But…doesn’t that just about cover it? What else could I possibly say?”

Presuming you’ve had a man write to you before, is it really all that interesting when he tells you that he thinks you’re cute? Is there something particularly energizing in the phrase, “I think we have a lot in common”? Is it really all that intriguing when he explains why he’s a good partner for you, even though you haven’t met? Even if a guy reads your entire profile and respond to one specific line, do you really get excited by a man who says, “I notice you like skiing. I enjoy Breckenridge.”

Then why would you write an email like that to a man?

I’m really grateful, Jane, that you made that connection between a first email and a come-hither look at a bar. That is EXACTLY the metaphor I use for private clients in describing the “tone” you want to capture in your initial contact. You’d never hit on a guy at a bar by walking up to him and telling him that he’s cute, he seems nice, and that you’d like to buy him a drink. So why would you write an email that does the same thing?!

If you want to meet a man at a bar, you cross the room, plant yourself eight feet to his diagonal, wait for eye contact and smile. Once you smile, it’s his job to come over. While you might have “made the first move”, you’re still in control, since he has to approach you.

It’s a bit counterintuitive, but if your first instinct is to compliment him and explain your value, you’re not demonstrating that you have any value. 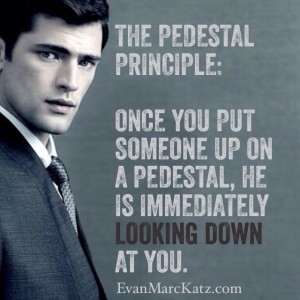 Once you put a man on a pedestal, he’s automatically looking down at you.

Once you tell him how great he is, he doesn’t know why he should write back.

So yes, Jane, you should totally write to the guy. But the tone of that email should be flirty, funny, and challenging – the same as the email from a man that gets your attention.

As to HOW to do something like that, here’s a link to my Finding the One Online program, which spends a full hour explaining how to email people online. Hope it clarifies things a bit.