I’m a 42 year old single male who recently left a 5 year relationship for various reasons, but mainly because I wanted kids and she did not. I thought that since I was an attractive, fit, well-educated, financially and emotionally secure guy that I would have no problem finding a woman in her mid 30s to settle down with and start a family. I have tried a combination of online dating, speed dating, professional singles events, volunteering, happy hours etc. and have had very few dates over the past year. I thought that online dating would be great since you are essentially pre-screening people for dates. I have found that I get no responses from any women online and the only women who respond to my ad are usually much older and don’t meet any of my criteria outlined in my profile.

I am told that women want to settle down and have kids, etc., but their actions seem to be to the contrary. At singles events, women come in groups and are reluctant to talk to men. In online situations, women say they want desperately to meet a nice guy like me, but never answer my response to their profile. I am trying to remain positive, but two things are really bothering me. One, that younger women are no longer interested in dating men who are even just slightly (3-5 years) older than them and sometimes want to date men 5-10 years younger then them. Two, women seem to be content in the fact that they are independent and self-sufficient and have a career, family and friends that fulfills them and don’t seem to be interested in truly finding a relationship. I find the latter hard to believe, but find this mantra in every profile of every professional woman online. Any advice on how to navigate these new paradigms in the dating world?

You came to the right place.

And to directly address your email, I have to divide my response into two different parts: 1) What You’re Getting Right and 2) What You’re Missing. 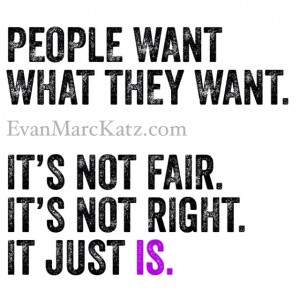 What you’re missing is that what you want has absolutely no relation to what women want. We’ve addressed this before, from an older man who couldn’t possibly fathom why a younger woman wouldn’t want to be with him. This isn’t all that much different. We can complain that the opposite sex is unrealistic and passing up great opportunities — and we’d be right — but it doesn’t change that people want what they want. It’s not fair. It’s not right. It just IS.

From 25-34, men play around a lot. Why? Because they can. They have a lot of dating options, they’re building their careers, and there isn’t a clear urgency to settle down.

Once a guy crosses 35, however, he (theoretically) tends to get more serious.

What you’re missing is that what you want has absolutely no relation to what women want.

Alas, the women with whom he wants to get serious are 27-34. This gives men time to court, fall in love, travel together, move in, get engaged, and enjoy a few years of childless marriage before starting a family.

The problem is that many women from 27-34 are independent professionals just like their male peers. They, too, have a lot of dating options, are busy building their careers, and don’t have a clear urgency to settle down.

Then she hits 35. Theoretically, this is when she starts to get more serious. This is also when all the problems start.

The 35-40-year-old women who ARE ready for marriage, unfortunately, are roundly ignored by the men they desire — their 35-40-year-old peers. These women are youthful and find themselves far more attracted to men in their 30’s than their 40’s.

…the bigger takeaway is that ALL of us are very judgmental on age.

Which brings us to you, Adam. You say you’re looking for a woman in her mid-30’s. That’s perfectly fair. But if none of them are looking for you, your wheelhouse is going to be women in their late 30’s to early 40’s:

I’m being a bit unfair, Adam, because there IS a market for a 42-year-old man — and you can certainly be doing better than you’re currently doing. Pick up a copy of Finding The One Online  and it should make a difference. Seriously. But the bigger takeaway is that ALL of us are very judgmental on age. To a 34 year old woman, 42 sounds OLD. To a 42-year-old man who wants his own biological children, anything above 36 is getting into risky territory. The lesson to all of you younger readers: take your love life seriously when you turn 30, instead of waiting until you’re 35 or 40.