Home > Blog > Sex > How Do I Handle a Guy Who Gets Angry When I Won’t Have Sex With Him? 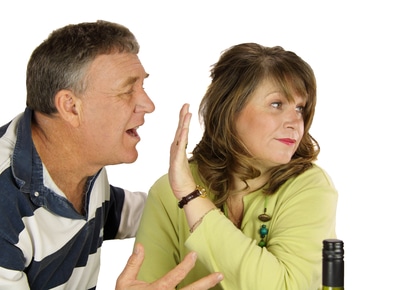 I’m an EMK junkie, rely on Why He Disappeared, divorced almost 2 years after a 15-year marriage, and a mother of two teenage boys. My situation is a little different. I’m not so worried that if I sleep with a man too soon, he’ll break my heart. I’m afraid if I do, it will cloud my judgment, I will minimize warnings or look away from very important character flaws. I’m not worried that Mr. Right now is the same as my last guy; I recognize that this is my issue, so I try to go slow. I mean not freakishly slow but slower than, it seems, everyone else. Recently, after a 2nd date, I followed your advice to the letter to try to figure out if he was interested in me or for sex. But I also did it because I saw some warnings signs (an undertone of control, blaming, and maybe some jealously) and he was clearly testing my boundaries sexually. I knew if I slept with him, I’d be a goner. He was a charmer but everything was on his terms.

Well, he disappeared after he got PISSED at me. He said “you said you were “just” dating” and blatantly lied about another concern I was trying to suss out. Evan, is it wrong to use your strategies when you are “just” dating? I do want a relationship, eventually, when a nice guy with an edge comes around but until then I am dating, having fun, getting to know them so I can decide and I make that clear from the start. And does “just” dating mean that I am “just” looking for sex in the eyes of the rest of the world?

Your question started off really strong and you lost me somewhere in that second paragraph. So let’s try to untangle what you actually wrote.

You seem to think it makes a difference WHY you choose not to have sex with a guy. It doesn’t.

You’re wise enough to know that sleeping with someone clouds your judgment. I call it the Deception of Passion. You have sex, the oxytocin and serotonin and dopamine and pheromones start flowing, and you get irrationally attached to someone who may not be a good long-term partner.

Great. Now that we’ve established this as a fact, we’ll dig in further.

You seem to think it makes a difference WHY you choose not to have sex with a guy. It doesn’t. He doesn’t need to know. He doesn’t need to understand. These are YOUR boundaries, no matter what the reasons are. And I suspect that a big part of your problem is that you tried to EXPLAIN all of this to him somehow.

Otherwise, I don’t see how he could have exploded at you.

If you did things exactly as I coach, it would have gone something like this:

Brad reaches for your belt buckle while simultaneously reaching for his wallet.

You put a hand on his and say, “Brad, I’m really attracted to you and I am having a GREAT time right now. Just so you know, I don’t sleep with guys that I’m not in an exclusive relationship with. So as much as I want you, until you and I figure out whether we’re a couple, we’re gonna have to just stick with some fun foreplay for the night.”

Him: “Wait, you don’t sleep with anyone who is not your boyfriend?”

You: “Something like that. It’s really easy to hop into bed with someone, but things tend to get a little messy unless we know where we stand. I have this funny thing about not sleeping with a guy who is still active on Match.com. You can understand that, right, Brad?”

You: “So let’s get back down to business. We’ll figure out the rest as we go…”

You fool around, he leaves, and the next day, he has to decide: is he into YOU, or does he just want to get laid? If he just wants to get laid, he’s barking up the wrong tree. But if he’s open to a potential relationship, he’ll call you quickly thereafter to set up another date. Together, you’ll navigate this territory, but the boundary has already been drawn.

So I don’t know where this went wrong for you, but I’m guessing your conversation didn’t go quite like that. I’m guessing you told him about the deception of passion, minimizing warning signs, keeping your options open, dating other men — all of which serves to TOTALLY destroy the moment, despite your best intentions.

The short version of what I’m saying is this: you’re trying to date like a man, but you’re communicating like a woman.

You’re trying to date around until you find the mythical “nice guy with edge”, which means you’re keeping your options open. But unlike men who do the same thing, you’re not sleeping with anybody and you’re having deep relationship discussions at precisely the wrong time. Which is what caused the latest bout of friction.

Listen, you’re entitled to do whatever you want. It’s not wrong to use my strategies when you’re just dating. They work in every situation. But it all begins with you being able to internalize the lessons and communicate your needs clearly.

Seems to me that you’re a little vulnerable, a little confused, and don’t really know whether you want to have sex outside of a commitment. And until you get clear on what you can handle, men will remain unclear on how to approach you.

To answer your question more pointedly, you can have fun with any number of guys who are not your boyfriend because you’re “just dating” until the right one comes along. And they are equally allowed to determine that since you’re not putting out, they’re going to fade away and find someone who DOES put out. This is called DATING. But if you use what I said above, the RIGHT guy will stick around and play by the rules and you won’t have to spend any time worrying about the WRONG guys who run.