Home > Blog > Dating > Sex > Why You Shouldn’t Have Sex With Your Friends – Or Should You? 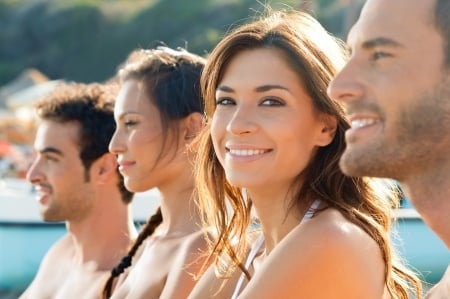 You saw “When Harry Met Sally…” but have you lived it?  I have. Once had a wicked crush on my best friend from eleventh grade. Lost touch, got back in touch, lost touch again. We hadn’t seen each other in four years when we reconnected after college, but when we did, we slept together. It was everything I’d dreamed of, but it was so…foreign…and somehow, wrong.  We stayed in touch for years afterwards — but we never ever got together again.

The thing about friendship is that you’re dealing with an established commodity. It’s not like meeting a cute stranger, swapping spit, and giving it a whirl. The stakes, in this instance, are a lot higher, because there’s actually something to lose.

It was everything I’d dreamed of, but it was so…foreign…and somehow, wrong.

Now I’m sure you know a couple of longtime friends who got together after a dozen years of dating the wrong people and now they live happily ever after with their three kids in Sheboygan, WI.   It happens and I’m sure it’s close to an ideal situation.  I mean, after all, who better to be your partner than someone who knows you as a friend first? But this is the exception and not the rule. 99% of relationships fail, otherwise you’d be married to your Spin the Bottle boyfriend from sixth grade. So if all relationships are fraught with danger, yet who better to navigate it than a trusted friend, what can we conclude?

Well, we know that sex is complicated. For some, it’s a lustful response to something visual. For others, it’s a tender, wordless expression of affection. Some people have sex. Some people make love. Women also have the added pull of the “cuddling” hormone oxytocin, which bonds them emotionally to men and makes unattached sex even more difficult.

Factor all this into the loaded variables that come with friendship.

Maybe he’s been pining after her for years, playing the dutiful best friend.

Maybe she’s spent all her time dating jerks and never bothered to consider him before.

Maybe they live in different states.

Maybe they work together.

Maybe they spend a lot of time together already.

Maybe their relationship is a secret.

Maybe their friends always joked about them but she said no.

Maybe she tries his last name on for size.

Maybe he pictures her naked….

Maybe they’ve talked about it before.

Maybe they just got drunk and kissed.

Sex with a friend is a minefield of maybes, and a good majority of the time, you don’t make it to the other side without losing a limb.

Sex with a friend is a minefield of maybes, and a good majority of the time, you don’t make it to the other side without losing a limb. That’s why, in my humble opinion, sex with a stranger beats sex with a friend. There’s no baggage. No white elephant in the room. It’s far easier to let it all hang out if you know you may very well not see your sex partner again. With your friend, you have no choice. It’s your friend.

You know how much the friendship’s worth to you, and what you stand to lose by letting sex get involved. Personally, I think it’s a gamble that can pay the hugest possible dividends. Just remember that in the end, most gamblers lose.