I Think All Men Are Players. Why Can’t I Find a Boyfriend?

I am tall, blonde, 36, and curvy.   I also have a unique problem. I was raised by a “player type” father, and I am unfortunately too comfortable with their games.   As a result, I blow men off very quickly when I see the signs of being a ‘player’.  If they dont call me when they say they will, I just move on and delete their number.  When they do call and I don’t recognize the number, they get upset. If they ask me out for Sunday and dont call to confirm, I assume we are not going. When I do talk to them, they ask why I didn’t call and get upset. I know if I sleep with them on the first date, they will not call me ever, so I don’t chase them, even if we have a great two days of conversation and sex.   I do sometimes wonder if I should though.   If I know I am going to sleep with the guy, I will tell them up front that I want  sex because I know we wont see each other again. They try to woo me over and say I am wrong and I just say ‘who cares’.  I sometimes think I am already assuming it is over before it begins because I know “he isnt that into me”.

How do I know if they are into me since I now think like men?   I feel like they have to basically kiss my ass until I become fully aware, because now I feel as though I am somehow rejecting them before they have a chance.   Is that okay or am I just being smart?   Hard to ask my friends because they’re needy and I’m not.   I do not call unless they call, chase or bug unless I want sex. In person ‘I live in the moment,’ knowing full well men do too.   I even listen to the ‘I want a family speech’ and smile and playfully change the subject since I know it is meaningless. They even give me the speech that they are not ready for a commitment and I know they are trying to protect me, but I find it odd because I didn’t do anything to warrant the conversation. I know if he is into you, he will act it and all these speeches mean nothing.   (You can tell all your female clients that these guys call me for years as friends because I don’t chase them, BTW).

I am just bothered because I am not dating them, and I want to date and have a good time and eventually find a good partner. I think I am pretty hot and fun so I am not too worried. Most younger men chase me, men my age are threatened and older men just don’t have the energy, but yes, chase hard. They all tell me ‘I am too cool’ and I don’t say that with pride BTW.

So, Evan, am I being too cool or really playing smart?   How do I get to the dating part or is this normal by weeding out so quickly?   And why do they all, I mean all, come back to me after I blow them off?

Thanks for your time!

The bright spot is that your understanding of men will make you great in a relationship. But in order to get into a relationship, you have to work backwards to find out what’s not working for you.

Here’s what’s not working for you:

You think that because you understand male behavior, you should be the woman men want to date.

It’s the world’s greatest defense mechanism – let nobody in, nobody can hurt you. Congratulations, you win!!

You’re trying to be ‘smart’ by cutting off men at the first hint of games. But they’re not even PLAYING games. They’re calling you, wondering what they did wrong, trying hard to win your favor, but to no avail. By looking for any sign that a guy’s going to hurt you, and turning it into a reason to freeze him out, you ultimately leave yourself alone and use your ‘coolness’ as the excuse. It’s the world’s greatest defense mechanism – let nobody in, nobody can hurt you. Congratulations, you win!!…

You live in a world where men are the enemies. But your heightened defenses are actually what’s killing you. By never showing any hints of vulnerability, you may prove to all the men who ‘come back for more’ that you’re the coolest chick around, but you’re not getting anyone to fall in love with you. You just become their guy friend. Which is where being ‘too cool’ flips over on you, Tray. 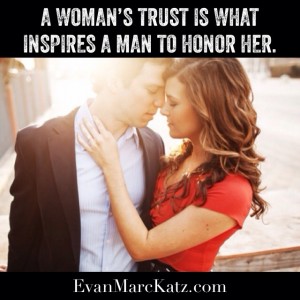 My wife is cool; she lets me be myself, hang out with guys, write about sex, talk about ex’s. But she’s not ‘too’ cool. She’s got a lot invested in me. She lets me know when she’s upset. If she acted like: ‘The dating coach is probably gonna cheat on me because most men cheat on women,’ I wouldn’t feel particularly good about her. Her trust is what inspires me to honor her.

In trying to beat men at their own game, it seems you’re only defeating yourself. You can call up a guy for sex so you can use him ‘like a guy’, but how does that make you feel? How does that further your goal of having a relationship? It doesn’t. Nor does assuming that every misstep is a ‘game’. Just cause a guy doesn’t call or confirm on time doesn’t mean he’s never to be trusted.

Just because five straight guys cheated on you doesn’t mean the sixth will as well. Each new guy has NO relationship to the last guy whatsoever.

This doesn’t mean that some guys AREN’T a load of shit. He’s Just Not That Into You tapped into the zeitgeist for a reason. If he doesn’t call, sleep with you, commit to you, propose to you, etc, he’s just not that into you. But that doesn’t mean that if a guy doesn’t follow up on a date the way YOU want him to, that he’s a liar who’s just out for one thing. It may mean he forgot, ran late, or had to take his ailing mother to the hospital. That’s life. Until you’re more forgiving, you’re going to be missing out on a relationship.

Just because five straight guys cheated on you doesn’t mean the sixth will as well. Each new guy has NO relationship to the last guy whatsoever. Yes, men can be men, but that doesn’t mean that EVERY man is that way. By assuming each man is a player, you never let anyone in and you never experience love.

From what I can tell, Tray, the reason you’re single is quite simple: you don’t believe a guy can sincerely love you. And unless you believe it’s possible, no man is gonna believe it either.

Click here to learn how a simple shift in attitude can foster true understanding of men, and manifest the relationship of your dreams.