Home > Blog > Cheating > How Do You Convince Your Cheating Girlfriend That She’s Really In Love With You? 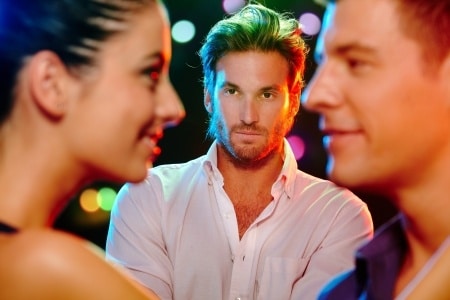 Have had the most exciting relationship in years with a girl named Tonja. We truly have/had a wonderful relationship that was progressing magically. But Tonja had her heart broken 3 months before by a prior love named Chris. After seeing that Tonja had moved on and was apparently SO happy, he began calling, stopping by, texting, emailing, etc. Tonja told me about it but after some time she became confused and felt like she now had strong feelings for the both of us.

What’s the right thing to do in this situation? Pull back and give her space with the risk of losing her forever (or at least until this relationship fails again with Chris) or fight like hell to win/keep her in my favor? There are other dating “experts” out there that go from one extreme (i.e. NO contact for a month and make her miss you) to others that recommend the flowers, cards, phone calls, compliments, reminders of special times. Right now, Tonja is on the fence and cries everytime she sees me but seems to be gravitating toward him. What is the right thing to do? I AM MISERABLE!!!

Hate to be the one to tell you, but, well, you did ask.

And even if she does love you — even if your relationship was as great as you said it was – you’re clearly ignoring some pretty big stuff.

Namely, that Tonja is a terrible girlfriend.

Now don’t get all defensive on me. I’m sure she’s a charmer. But it seems to me that there are a few things that are supposed to differentiate a girlfriend. Here’s a very simple list I came up with:

Are you seeing it yet, Dan?

You have a bad girlfriend….

As far as how you should proceed? Well, you can’t fight for someone who doesn’t want to be fought for. As DJ EZ Rock said, “It takes two to make a thing go right,” and right now, Tonja is making a great case for going solo.

So get this straight: It’s NOT about ignoring her to make her miss you, and it’s DEFINITELY not about flowers, cards, and compliments to win her back.

It’s about one thing, and one thing only.

Walking away with your head held high, and your dignity in tact.

And when Tonja finally comes back, you’ll be able to tell her the best possible news that you probably haven’t even considered: you found yourself a real girlfriend, one who treats you the way you deserve.