How Do I Get a Second Date if Our First Date Was Terrible?

Hi Evan. Recently I had a date with a guy in whom I was very interested… and I think I blew it! I had something shocking happen right before my date, and the stress took it’s toll on my mood and my appearance, plus the lighting in the restaurant really made me look horrible. It’s rare that I’ve been so attracted to a man so quickly, and I guess this made me doubly nervous, and I wasn’t my normal self. Also, I am getting over the flu, and I gained 5 pounds and hadn’t been working out for several weeks, so I felt very uncomfortable, and it showed. Nonetheless, we talked for 3 hours over dinner and for the most part, it was a lot of fun. Yet, I felt like his attention kept drifting to other people, particularly the attractive waitress, and I felt really diminished. And when the date was over it was like he couldn’t wait to get out of there and he didn’t walk me to my car. I was devastated. I don’t think I’ll ever hear from him again. So how does one handle this kind of situation? Is there any way to get another chance, or should I just let him go?

Thanks very much. —Jem

Give yourself a break, sweetie. This is par for the course in dating. It’s happened to pretty much every man and every woman out there, and we all managed to survive.

I remember a date I had in 2006 where we had great chemistry, but somewhere along the line, I lost my sense of playfulness. I remember my date teasing me about being a dating coach and I just became really serious and earnest.

I could see her attraction drain from her body, and I spent the rest of the night scrambling, to no avail.

Once you put a man up on a pedestal, he’s immediately looking down at you.

There was no convincing her that she was wrong — because she wasn’t wrong. I acted like a needy dork and I paid the price.

There would be no second date for me — the confident and irrepressible dating coach.

I wrestled with my embarrassment, beat myself up for a week, and went back to the drawing board.

I met my wife a few months later.

So instead of wondering how you can get another chance or what you can do to make him forget what he experienced, how about you change focus here?

What are you going to do to make sure that the next time you meet an attractive guy, you don’t act like a Nervous Nellie?

At this point, I only think it’s appropriate to cite Alison Armstrong, who says that when you have a “10” chemistry with a man… run in the opposite direction. For the very reason you stated, Jem. You can’t be yourself around him. You’re not comfortable. You’re not confident. You’re not relaxed or funny or even particularly likeable.

So you’re faced with two choices: either choose to date men who you can be yourself around, without losing your cool… or learn to treat hot guys the way you treat regular guys. 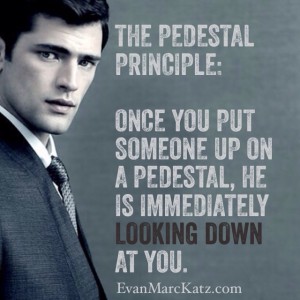 See, this is what I call The Pedestal Principle — which I first wrote about in Finding the One Online: “Once you put a man up on a pedestal, he’s immediately looking down at you.”

Same way YOU’D feel if some strange guy acted all weird and nervous and told you that you were the most beautiful woman in the world and that he hopes you like him and that he knows he’s being a little weird tonight, but he’s not normally like this, and are you enjoying your food, because from that look on your face, it’s kind of hard to tell, and I’m putting my foot in my mouth right now, aren’t I?

Doesn’t mean this guy isn’t the best person in the whole world. Just means that he’s not going to get a second date with you.

The next time you’re with a cute guy, try treating him like your best girlfriend. You know, the one you can say anything to? The one who loves you unconditionally and laughs at all your silly jokes? The one who never judges you and makes you feel amazing?

Men and women are both suckers for confidence. If you have it, most guys will want to see you again. If you don’t, very few men will.

It’s not much more complicated than that.