Why Won’t He Take Steps To Finalize His Divorce? 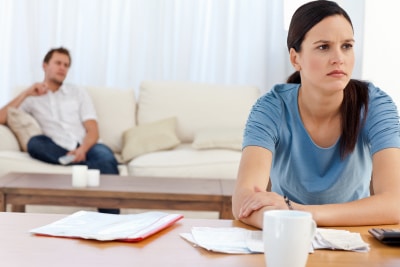 I have been with someone for six months. He and I are very compatible and have a great time together. He has two kids who I’ve grown to adore. The only problem is that he’s still married.

He’s been separated from her for three years (she cheated on him). He wants a divorce from her and she’s a massive pain to him, but he just won’t take the steps to begin his divorce. Until recently, he was still paying her bills on top of his own (she refuses to get a job because she’s a “musician.”) She has custody of the kids and all he can talk about is getting custody of them, but I can’t get him to begin to take the steps he needs to go through to get to what he wants.

On top of this, any time I bring it up, he accuses me of being worried he wants to go back to his wife. That couldn’t be farther from the truth. I just want him to be happy and it is obvious to me that he’s not happy in his current situation. Please help me. I love my boyfriend and he loves me. I love his children. I just want him to take the steps towards being legally separated from her. -Caitlin

There’s absolutely nothing preventing your boyfriend from getting a divorce.

Your question reminds me of one I got a year ago, in which a man wrote in that his girlfriend wanted him to get a divorce, but he wouldn’t because he was on his wife’s healthcare. In that instance, I sided with him. He was clearly in love, but he was caught between a rock and a hard place, because getting married would cost him tens of thousands of dollars in medical bills.

It was one of the rare instances in which the majority of my readers disagreed with me. And while I haven’t changed my position one bit, it’s always stuck in my craw that I couldn’t get more people to see his point of view.

And that’s why I chose your dilemma, Caitlin. Because while your situation is similar, there’s a very important distinction that tilts my sympathies in your favor:

There’s absolutely nothing preventing your boyfriend from getting a divorce.

So that begs the question: why would a man who has been separated for three years from the wife who cheated on him NOT want to divorce her?

Beats the hell out of me.

Which is why your question is better directed towards HIM than yours truly.

I can’t omnisciently declare what’s going through the minds of all men, especially when it’s not clearly rational.

The best source of clarity, therefore, would be your boyfriend.

When he says, “You’re afraid I’m going back to my ex,” and you say, “No, I’m not. I’m afraid that if you never get divorced, we’re never going to get married,” you’ve ended his false line of reasoning and put the ball back in his court.

Now, instead of letting him wiggle out of it with another non-answer, nail him down and get an answer to the following $64,000 question:

I can’t omnisciently declare what’s going through the minds of all men, especially when it’s not clearly rational.

“Why don’t you initiate divorce proceedings and get legal shared custody of the kids? What’s holding you back?”

You may learn that he’s financially dependent upon her.

You may learn that he still hopes to get back together one day.

You may learn that a divorce will cost him a lot more money in alimony than he wants to pay.

You may learn that the status quo is fine and that a divorce may hurt the amount of time he has with the kids.

Or you may just realize that he’s a doormat — a man who is willing to pay the bills for his cheating ex-wife and play entirely on her terms.

No matter what you learn, Caitlin, at least you’ll get some clarity moving forward.

And if marriage is your endgame and he’s not playing, it’s time to walk.

This website uses cookies to improve your experience while you navigate through the website. Out of these, the cookies that are categorized as necessary are stored on your browser as they are essential for the working of basic functionalities of the website. We also use third-party cookies that help us analyze and understand how you use this website. These cookies will be stored in your browser only with your consent. You also have the option to opt-out of these cookies. But opting out of some of these cookies may affect your browsing experience.
Necessary Always Enabled
Necessary cookies are absolutely essential for the website to function properly. These cookies ensure basic functionalities and security features of the website, anonymously.
Functional
Functional cookies help to perform certain functionalities like sharing the content of the website on social media platforms, collect feedbacks, and other third-party features.
Performance
Performance cookies are used to understand and analyze the key performance indexes of the website which helps in delivering a better user experience for the visitors.
Analytics
Analytical cookies are used to understand how visitors interact with the website. These cookies help provide information on metrics the number of visitors, bounce rate, traffic source, etc.
Advertisement
Advertisement cookies are used to provide visitors with relevant ads and marketing campaigns. These cookies track visitors across websites and collect information to provide customized ads.
Others
Other uncategorized cookies are those that are being analyzed and have not been classified into a category as yet.
SAVE & ACCEPT
171 Shares
Tweet
Share171