Why You Should Ignore Your Previous Experience With Men 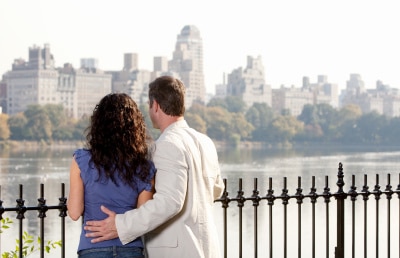 Hi, my name is Evan Marc Katz, Reverend of the Universal Life Church. Last year, I officiated the wedding of my little sister, Daryl, in San Francisco.

The event was incredibly meaningful to me for a number of reasons, but the story I want to share with you is how Daryl met her husband, Dave.

Daryl was in her 20’s, living and dating in New York City. She’s very bright, sarcastic, and intolerant of “games” and B.S. As a result, Daryl had a rough go with the lawyers and bankers available to her in NYC. She decided to branch out.

All were impressive men. None lasted. Daryl decided to go on “guyatus”, as she was burned out on both New York and long-distance love affairs.

It was around that time that I wrote my first book, “I Can’t Believe I’m Buying This Book: A Commonsense Guide to Successful Internet Dating”. Before I sent it to an agent, I wanted to get my bookish sister’s opinion on things.

The first thing Daryl said to me was, “Why would anybody read a book by YOU?”

The second thing she said to me was, “Online dating is creepy.”

I’m only sharing this with you because my extremely bright sister was WRONG about everything she firmly believed.

The only reason she is happily married and househunting today is because she was open to the possibility that her beliefs weren’t 100% foolproof.

Contrast Daryl’s story with Amy, a 42-year-old woman who reached out to me for dating coaching last week.

Amy believed — based on her experiences — that there was nothing she could do differently. The real problem is everyone else.

I like Amy. She’s successful, family-oriented, looks great for her age, and is an information seeker. After a few minutes of talking on the phone, it was clear that Amy had already read a lot of the books in my relationship book bibliography.

Except Amy didn’t become a client.

She didn’t become a client because Amy believed — based on her experiences — that there was nothing she could do differently. The real problem, she claimed, is everyone else.

“It’s guys in Los Angeles. They’re Peter Pans who won’t settle down and are always looking for someone younger.”

“Men out here don’t appreciate someone with ethnic looks. They all want California blondes.”

“I keep meeting men who are so messed up. They’re all out for sex. They don’t have any money. I’m not going to support a man.”

Can you appreciate Amy’s point of view? I sure can. It’s built on years and years of failure, frustration and disappointment.

Amy’s experience is REAL. As real as the nose on her face. And because it’s real, she also believes that it’s TRUE.

Then again, my sister truly believed that no one would read a book by me, that online dating was creepy, that long-distance relationships were doomed, and that men were all heartbreakers. That was her experience before meeting Dave.

I could easily refute Amy’s point of view — but she would rather hold onto it, believing that she’s “right”— than open up to a new way of dating like my sister did.

And it’s a shame, because Amy has SO MUCH to give.

Amy’s experience is REAL. As real as the nose on her face. And because it’s real, she also believes that it’s TRUE.

And if I’M that kind of guy, it only stands to reason that there are thousands of others like me in Southern California.

Because her online dating profile and communication need improving.
Because her attitude about men needs adjusting.
Because her radar for “quality men” is really off.
Because she would rather hold onto her glass half-empty worldview and be “right” than try my glass half-full worldview which will create better results.

Instead, Amy is going to keep reading my advice and hope that Mr. Right – an ethnic lover from another state, apparently – comes and fishes her out of her office.

I like Amy, but she’s going to be waiting for a while.

You don’t have to.

My question for you is whether you’re self-aware enough to know what disempowering and false beliefs that you hold to be true.

Have you had any experiences that have made you change your mind for the better about dating, online dating, men or relationships? Or do you have a negative attitude about the opposite sex that pervades your interactions. Don’t lie, regular posters. I know which of you are suspicious of men. And I know that you hate it when I point out that your attitude can change a lot more readily than men…