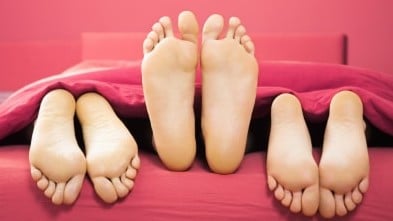 Writer Kendra Holliday has been with her partner for four years. They’re in a long-term relationship but aren’t married. They don’t live together — they keep their households, finances, and families separate. Why?

Her goal is not to have a healthy relationship. It’s to “intensify the living experience.”

Through polyamory. Not to be confused with polygamy, polyamory refers to the practice, desire, or acceptance of having more than one intimate relationship at a time with the knowledge and consent of everyone involved.

In Love Like an Ocean: Diving Deep into Polyamory, she writes that “love is like an ocean, not a bathtub. One person doesn’t need to get out in order for another to get in.”

Her relationship is open, allowing her and her partner to experience intimate relationships with other people, such as dating, loving, and exploring sexually. Sometimes they do it together; other times, separately.

She argues that “it’s endearing for a woman to run a cupcake blog and bake a different cupcake recipe every day of the year. It’s admirable for a couple to grow prized orchids or breed teacup Chihuahuas. But to love Peggy AND Sue at the same time? That’s scary.”

Regardless of the relationship style, she lists the following traits are desirable for ANY healthy relationship: agreeableness, confidence, conscientiousness, and, the “trickiest” one — being emotionally stable.

You can read the full article here.

I’ve never experimented with polyamory myself, but I do find the concept interesting.

Since monogamy isn’t natural, but rather a choice that couples make to preserve a union, it is certainly compelling if a couple can pull it off.

What makes the concept of polyamory interesting is that it’s not cheating. It’s sanctioned within the relationship, by both parties, because sexual variety is appealing, and it doesn’t pose an existential threat to the relationship. That’s highly evolved thinking, if you ask me. I’ve always said that if my wife cheated on me, I wouldn’t break up with her. What I don’t know is how comfortable I’d be if this were a regular (and sanctioned) occurrence. I’d like to think I’d be big enough to handle it, but maybe not.

And perhaps that’s why most relationships involve only two people: our basic, gut-level jealousy and insecurity about what sex with others means.

Why should a joyful sex act, intended to hurt no one, invalidate a perfectly happy relationship? I’m not quite sure.

And yet, it does…unless you’re both polyamorous.

(Oh, and when you do discuss, two requests: please don’t claim that I want to cheat on my wife. I’m a dating coach who’s forced to publicly think about my honest, unbiased take on dating and relationships. It’s not a crime to admit that while I’d never cheat because I have integrity, there are still many women who are physically desirable in the universe. Show me a man who says that his wife is the only woman he finds attractive and I’ll show you a liar. And please don’t argue with me about biology. The same way that homosexuality is not a choice, monogamy IS one. Billions of men override this biological imperative every day, but it doesn’t mean that they always want to. Read “Sex at Dawn” and then consider all of the men who cheat and refuse to commit for further evidence that men want sexual variety. So with those facts on the table, what is YOUR take – can two consenting adults still love each other unconditionally and have sex with other people?)