Home > Blog > Dating > Becoming Exclusive > Passion Vs. Comfort: Do You Have to Have Fireworks to Have a Successful Relationship? 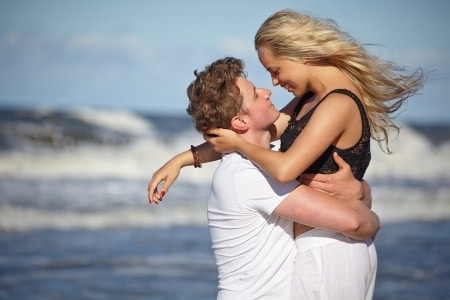 Passion vs. Comfort. This is a post you don’t want to miss, inspired by a discussion on my (500) Days of Summer thread. Here’s the gist of it. Reader Lori writes:

I have been with a man who loves me, and has loved me, as close as one can get to unconditionally for over 13 yrs…. I was never totally madly in love with him, but he knew he wanted to marry me the minute he met me. I married him — BECAUSE he was a great guy in so many ways, minus the sky illuminating fireworks. Don’t get me wrong, intimate moments were always adequate…even pretty damn good at times. But never, well, you know…crazy great. Almost fourteen years later, I remain married and faithful, but with an empty space in my heart. And wondering if I aspired to mediocrity and lost out on the amazing feeling most of us have felt at some time, of true selfless love. I love him….but I’m not ‘in love’ with him. And that is what has happened to EACH AND EVERY married friend I have, (male and female) that married simply because of the reasons you mention… many have strayed, the others are simply living there…yet nobody’s home.

Because if you take as gospel what she says — “passion or bust!” — you might have a long and lonely road ahead of you.

Everyone I know that married because the partner seemed a great choice, would be a great dad, etc. ended up divorced or unhappy. The FEW couples I know who are happily married — still love to hold hands AND ‘make-out’ — THEY married someone they felt intense chemistry for & vice versa…and of EVERY one of the divorced friends, several who are dating but have not found love, only ONE tells me she made the wrong choice leaving. The rest say they would rather be alone, than with someone and lonely.

Please know, I am not a cynic. I have SEEN & BELIEVE IN great love & marriage, but it SHOULD NOT BE treated as a business decision — it sounds great in theory — but it just brings way too much misery for way to many down the road — you better be pretty damn sure you wanna come home to this person, sleep with this person, and walk on the beach holding hands with this person 50 yrs later…because divorce.. from what I have seen… hurts. And living in quiet desperation…hurts.

Listen, I’m a 37-year-old dating coach who’s been married for less than a year. As such, I’m not going to sweep Lori’s points under the rug or deny her 13 years of pain. She feels what she feels, she’s seen what she’s seen, and it’s perfectly valid. In fact, it’s very persuasive.

However, without negating Lori’s take on things, I’d like to try to balance it out a bit. Because if you take as gospel what she says — “passion or bust!” — you might have a long and lonely road ahead of you. And I’d rather you have a happy relationship instead.

Unfortunately, while I’d like to appeal to emotion (as Lori did), I have to appeal to logic. So first of all, let’s acknowledge that Lori’s working off a small sample size, and, like most of us, she finds evidence to support her existing worldview. Whether Lori knows them or not, there are plenty of happy couples who did not have instant magic and chemistry. I’m in one of them. It’s dangerous to extrapolate from five divorced friends who regretted their choice of husbands and conclude “this is how the world works”.

Next, Lori’s making the assumption that every woman who didn’t have that ga-ga, giddy, wobbly-kneed feeling about her husband feels as empty as she does in her relationship. This is not the case either. People who are generally satisfied in life are satisfied in marriage. People who are generally dissatisfied in life are dissatisfied in marriage. This is further explained in “The Paradox of Choice”, by Barry Schwartz. I can’t say what the right reasons are to get married or what the wrong reasons are. Nor can I say whether you or your friends truly settled. What I can say is that it’s really easy to envy others based on what you think they have in their marriage. The reality is often quite different. Yes, even for couples brought together by passion.

A movie called “Serendipity” illustrated this point well. In it, John Cusack envies his best friend Jeremy Piven’s perfect marriage…until he learns near the end that Piven’s getting a divorce. Who’da thunk it?

Envy is always a sin, and grass is ALWAYS greener. Seriously, Lori could sacrifice her marriage to pursue her dream man. The fact that she doesn’t means that there’s something compelling keeping her married — and it’s not simply the kids. I suspect she realizes that even if she doesn’t have the divine spark, being single in your 40’s is no cup of tea, and perhaps a kind husband is not so bad after all.

Reader Sophie follows up on Lori’s comment with this question:

Can you give me/us an idea of how many of your friends you think/know married people they weren’t in love with?… I’d like to know what percentage of people aren’t in love on their wedding day. I don’t want to “settle” but I think it would make it easier if I knew that it’s what a lot of people end up having to do.

For what it’s worth, I think MORE people are “in love” when they get married than not in love. Unfortunately, that “in love” feeling one experiences is often an illusion that masks severe cracks in a couple’s long term compatibility. Thus, being “in love” – what some might call passion or chemistry – is not necessarily correlated to a happy marriage. Doubt it? Look at all the times you’ve felt passion for someone, which, ultimately, amounted to nothing.

That leaves a certain percentage of people – fewer than the passion-seekers – who go into marriage without blinders on. I would guess most of them love their partners – much like Lori – they just don’t feel that THING that makes you feel like you just KNOW. These marriages have a greater likelihood at lasting, but only if these folks can get out of their “grass is greener” thinking. Once they go for greener grass, as Lori acknowledged, they find themselves in the same morass as every other single person – wondering how to find that elusive partner that gives them EVERYTHING, consistently disappointed that everyone’s falling short. If you’d rather be single and alone, well, congratulations, you’ve got your wish.

If you’d rather be single and alone, well, congratulations, you’ve got your wish.

I didn’t arrive at these conclusions from a textbook. I arrived at them as a newly married man, as a dating coach, and as a student of all sorts of dating and relationship advice. In short, I’ve long been asking the same questions that you have. After dating half of Los Angeles over 15 years, I didn’t rush into marriage — and I wanted to be sure that it felt the way it was supposed to feel.

Yeah. It hit me like a ton of bricks, too. But I got it instantly.

It’s not impossible to have ANY passion with comfort or ANY comfort with passion. It’s that the two don’t coexist easily. The very thing that ignites passion is friction and instability. Once again, look at your past. Passion is usually brief, intense and rocky. Comfort, on the other hand, tends to be softer and more nurturing.

Comfort, therefore, is not nearly as exciting, but it tends to last longer. Studies say that passion usually dissipates in 18-24 months. Which is why people who expect their passion to last for 40 years, in essence, are trying to defy the laws of nature.

In marriage, you’re not making a decision for the next six months. You’re making a decision that’ll last the next 30 years. And just like one might choose different career paths for passion or comfort, people choose partners for similar reasons.

Consider the 45-year-old struggling actress who still thinks she’s going to be the next Julia Roberts. Guess what? She’s not. But kudos to her – she followed her passion, she followed sher dreams, she never settled. She showed them!

I use the Hollywood metaphor because I was a screenwriter in my 20’s. I pursued it for 7 years because I knew that SOMEBODY made it in this town, and dammit, I was as good as they were. Agents, managers, execs, contests and film schools all agreed. But after writing 13 screenplays before I turned 30, and not making a consistent living at it, I made a conscious and difficult decision: I was going to put passion aside for comfort.

Due to some combination of unrealistic expectations, Hollywood fantasy, and human nature, we seem to think that all our dreams should come true.

I could have been the penniless 40 year old guy who continues to take a 1-1000 risk with his life…or I could get a new career. You know what I chose.

I have absolutely NO regrets.

Hey, I admire those who refuse to compromise – especially that tiiiiiiiiny portion who finds both passion AND comfort in work or love. But make no mistake, it’s rarely that simple. Passionate couples fight and divorce more readily than comfortable ones. Successful writers run cold, and are forced to find new careers. It’s easy to envy everyone else; it’s just foolish to do so.

All of this talk reminds me of a favorite Billy Joel song, Vienna, from 1977. In it, he wrote:

Dream on, but don’t imagine they’ll all come true.

Due to some combination of unrealistic expectations, Hollywood fantasy, and human nature, we seem to think that all our dreams should come true. Why?

Because we want them to. Because we’re good, deserving, people. Because SOMEONE has fantasies come true, why not ME?

I don’t begrudge you the right to your dreams. But at what point do you start to live in the real world, where people make compromises because they’re prudent?

Chances are, you’re compromising at your job — with your pay, your hours, your co-workers, your location, your status, your very career itself.

The alternative to this compromise is called unemployment (or, maybe, self-employment). Either way, it’s a lonely road.

Which is just my way of saying: think twice before you toss out that sweet, generous, good-hearted, loyal, honest partner of yours.