Home > Blog > Chemistry > Should I Marry My Boyfriend Even If Our Chemistry Is Lessening? 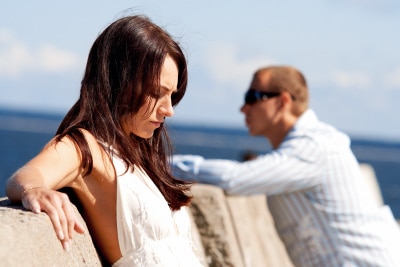 Dear Evan, I’m in a four-year relationship with a truly amazing guy. He is thoughtful, considerate, and funny. We share many of the same interests, and we truly enjoy spending time together. We have been living in different cities for a couple of years now and have managed a great long-distance relationship.

I am about to take the plunge and move across the country to be with him, but I am plagued with doubt. As great as we are together, I am finding that the closer I get to moving, the less I am attracted to him. We’ve never had sensational chemistry, but I’ve told myself that it doesn’t matter because he is such an amazing guy and we’ve enjoyed a fulfilling relationship despite that lack of spark.

Long story short, I am not sure if I am no longer finding him attractive because I am about to take a huge risk to be with him, or because the match is simply not right, or because (as awful as this sounds) I simply don’t find him attractive. I feel like I am crazy to not be head over heels for him and I know that he deserves someone who thinks he’s sexy — and I want to be that person. He is my best friend, and I want so badly to have that missing piece in our relationship fulfilled. There must be a way to help jump-start a spark or better chemistry…right? —Sara

I have a few questions for you.

If you’re essentially “vacation” love — seeing each other once a month, talking or texting a couple times a week, your relationship is much weaker than a prototypical four-year relationship.

1. How often did you see your boyfriend over the past four years? Lots of long-distance relationships involve flying every other weekend, spending family holidays, taking full month leaves.

Yet I wonder how much your lives are truly intertwined after four years. Because if you’re essentially “vacation” love — seeing each other once a month, talking or texting a couple times a week, your relationship is much weaker than a prototypical four-year relationship.

2. How did you make it four years with this guy, given your lack of attraction? Because if I were to read into your short note, I think this is something you’re creating – your anxiety is actually TURNING this into a problem. Witness the evolution of your email, in which you get increasingly pessimistic in each paragraph:

Paragraph 1: “We have managed a great long-distance relationship.” (Which presumes that the sex was good, too, since that’s part of the relationship).

Paragraph 2: “The closer I get to moving, the less I’m attracted to him. We’ve enjoyed a fulfilling relationship despite that lack of spark.” (You’re acknowledging the issue and teetering.)

Paragraph 3: “I simply don’t find him attractive,” you write. (You’ve all but talked yourself out of your relationship.)

So which is it, Sara? Is it somewhat sexually fulfilling? Or is kissing him like kissing your brother – and you’ve been faking it for four straight years?

3. What would you do if you thought that your boyfriend had these feelings? Would you encourage him to break up with you — his amazing girlfriend of four years — to find a better “spark”? Or would you acknowledge that attraction generally goes down over time as familiarity increases?

I suspect that you want me to give you the permission to break up with him to find the spark, but that you wouldn’t want him to break up with you for the same reason. I suspect that most of our readers would feel the same way — you wouldn’t want your man to leave you because you put on ten pounds, got a little wrinkly, had a baby, gone prematurely grey, etc.

So what does this mean for you, Sara? It means whatever you make it mean. You could toss your boyfriend back in the sea in hopes of finding a man just like him with an amazing spark.

Chances are it would take you a few years of dating to find him, you’d get your greater chemistry, but you would discover that the new boyfriend lacks some of the qualities that the current guy has — maybe he’s emotionally unavailable, maybe he’s short tempered, maybe he never wants to get married.

Or you could stay with him, which is what I’d probably advise. And instead of focusing on what you don’t like about him, you focus on what you DO like about him — the same way you’d like him to do for you as you age. So maybe your knees don’t get weak when he approaches, but if he’s got a tongue, fingers, a penis and the desire to please you, I would suggest that you can have a great sex life, even if you don’t have that spine-tingling chemistry.