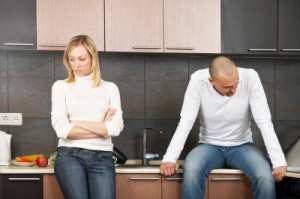 I have been dating a man for nearly three months now and in the beginning everything was fine between us. He used to do things with me, but I was wondering why he never introduced me to his friends or why he never wanted to come over my house. After 1 1/2 months I realized that he started to change. He didn’t call meanymore and he started to see me less. I once broke up with him for a week, but we got back together again and now he has even less time for me. He doesn’t answer his phone automatically anymore when I call or he keeps it turned off. I’ve become real frustrated and mad with him. Now I haven’t talked to him for a couple of days to see if he would call me, but he doesn’t and I still see that he is online at a dating site. When I met him he was overweight, but started to lose so much weight. Now I have the feeling that he is not serious with our relationship and still wants to see and meet other women. Please tell me what to do.

Thank you, Ingrid, for the cringe-worthy email of the week.

And you need me to tell you what to do?

If you’re not sure how to act with a guy you’re seeing, just do whatever he does.

How about I refer you here?

See, Ingrid, you’re not wrong for being confused or feeling frustrated at this guy. But from where I sit, your issue is not that unique. In fact, it’s the most popular question I get from readers.

“I really like him, but he doesn’t commit to me/call me/treat me well. What do I do?”

So instead of saying “He’s just not that into you” for the 400th time, I want to use your letter to illustrate a favorite concept that I discuss with clients.

Basically, if you’re not sure how to act with a guy you’re seeing, just do whatever he does.

If he calls you, call him back….

If he texts you, text him back.

If he tells you he loves you, tell him you love him back. (presuming, of course, that you do).

On the flip side, it also means that:

Men reveal themselves in their efforts. Their words don’t mean a thing.

If he doesn’t call you, don’t call him.

If he doesn’t text you, don’t text him.

If he doesn’t tell you he loves you, don’t tell him you love him.

This isn’t my version of “The Rules.” I’m not suggesting that you play games or refuse to return his calls or any of that crap. I’m saying that you should continue to be as real and authentic as you can be.

Just let him take the lead.

Because as I’ve said a number of times…

Men reveal themselves in their efforts. Their words don’t mean a thing.

If he calls, if he makes plans, if he commits, he’s interested.

If he doesn’t — if you feel you have to remind him that you’re alive and interested – let him go. He doesn’t deserve you.

It hurts to hear hundreds of women asking me the same exact question and genuinely struggling for the answer that’s obvious to everyone but them.

So once and for all, to all the women reading this: You deserve a man who WANTS to be with you, not one who acts like he’s doing you a favor by returning your call.

Please, send this article to all of your friends and let them know as well.

There’s no reason I should have to write this again.

But we both know I will.

This website uses cookies to improve your experience while you navigate through the website. Out of these, the cookies that are categorized as necessary are stored on your browser as they are essential for the working of basic functionalities of the website. We also use third-party cookies that help us analyze and understand how you use this website. These cookies will be stored in your browser only with your consent. You also have the option to opt-out of these cookies. But opting out of some of these cookies may affect your browsing experience.
Necessary Always Enabled
Necessary cookies are absolutely essential for the website to function properly. These cookies ensure basic functionalities and security features of the website, anonymously.
Functional
Functional cookies help to perform certain functionalities like sharing the content of the website on social media platforms, collect feedbacks, and other third-party features.
Performance
Performance cookies are used to understand and analyze the key performance indexes of the website which helps in delivering a better user experience for the visitors.
Analytics
Analytical cookies are used to understand how visitors interact with the website. These cookies help provide information on metrics the number of visitors, bounce rate, traffic source, etc.
Advertisement
Advertisement cookies are used to provide visitors with relevant ads and marketing campaigns. These cookies track visitors across websites and collect information to provide customized ads.
Others
Other uncategorized cookies are those that are being analyzed and have not been classified into a category as yet.
SAVE & ACCEPT
3K Shares
Tweet
Share3K