Can You Have Meaningless Sex While You’re Looking for a Long Term Relationship?

If you’re looking for a long term relationship… can you just go back to having meaningless sex until you find one? For the past couple years I feel that I’ve been so focused on doing the right things to attract long term relationships that I’ve lost touch with my vixen playful side, or at least hidden that side until I’m in a relationship. I feel like I’m going through a phase where I just want to have some hookups or just get LAID and go out with guys just because I’m attracted to them and because I CAN. Would that be totally backtracking? Will men still take me seriously if I “go there” right from the beginning? Lately I just don’t care HOW it’s perceived, I just want to have some sex with a hot sexy guy. Melanie

Like I said in a post from last week, rules are rules for a reason. You can choose to live by them, or you can choose to break them, but, for the most part, the results they produce are going to be somewhat predictable. So, as a rule, will men take you seriously if you “go there” right from the beginning? No, they will not. That’s where the whole idea of making a guy wait until he’s your boyfriend came from.

Men are usually sexual hypocrites who push you to have sex quickly and judge you for having sex quickly.

Men are usually sexual hypocrites who push you to have sex quickly and judge you for having sex quickly. Indulge them and you are unlikely to inspire confidence that you are “different” and that you don’t do this with “every” guy. I’m not saying it’s fair or right. I’m saying it’s real.

However, you know that, Melanie. What you’re concerned with is strictly feeding the beast that is your own libido. And frankly, I’m all for it. There is absolutely no contradiction between wanting to have some exciting, hot sex and wanting to find true, everlasting love. Both desires live within you and shouldn’t be ignored. I hooked up with a LOT of people on my way to marriage; some turned out to be girlfriends, most turned out to be random. I would never judge you for doing the exact same thing I did for ten years. BUT, (oh, come on, you knew there was going to be a ‘but’,) there are two things that merit your attention: 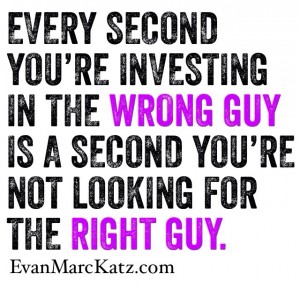 Every second you’re investing in the wrong guy is a second you’re not looking for the right guy. It’s not that there’s anything bad about playing around on the side while you pursue a relationship, it’s that if you’re juggling one or two booty calls on Tuesday and Saturday nights, when exactly are you making time for the potential keepers? That’s right: you’re not. The time and effort you put into pure sexual relationships could potentially be channeled into something that is, in the long-run, more productive.

You may want to be able to handle meaningless sex more than you’re actually able to handle it. It’s easy to theoretically have meaningless sex. It’s different when you’re intoxicated by the presence of a man, when you crave his touch and his attention, when you’re under the influence of oxytocin, which chemically bonds you to a man after intercourse. These are very real, very biological reasons that makes it far more difficult for women to sleep around. If you think you’re immune to these feelings, look back on your life at your more promiscuous days.

Were you feeling better about yourself?

Did you end up falling for some of those guys in spite of yourself?

History tends to repeat itself, and only you can answer whether you’d actually like it to. All I can tell you is this: if you have an itch and you need to scratch it, go ahead. But if you keep scratching that itch over and over, eventually, it’s going to start to hurt. Take care of your libido, Melanie, but don’t lose sight of your emotions in the process.

If your relationship is making you feel anxious, you must learn these 8 reasons why.
70 Shares
Tweet
Share70