Home > Blog > Sex > Why Does He Text Me Photos of His Penis? 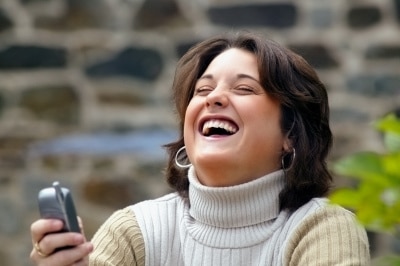 Evan,
I meet a man via an online dating site, we email back and forth, get to know each other, then he will ask for my phone number. If I like him I will give it to him. Then he will text me. I may even give him my email. This usually leads to him asking me out on a date. So far, so good, right? Well… here is the wrinkle!

About 85% of the men who get my telephone number and/or email do something very bizarre. They randomly and with no warning whatsoever send me a picture of their penis!! Erect!!! Also, they seem to prefer texting and emailing prior to a date, instead of actually calling me up and asking me for a date. But back to the penis issue… is this normal? How is a woman supposed to react? Why are they doing this? I mean, you’re just going through your emails or texts. It’s early in the morning and you’re drinking your coffee… and suddenly BAM! There is a fully erect phallus in your face! Coffee snorted up the nose, all over the keyboard!

I don’t want to hurt their feelings, but this is crazy to me! And these are actually nice guys! Normal jobs, normal-to-great-looking, very polite. I have no problem with sexual banter or even sexting in the build-up to a date or for building anticipation in a new relationship, but normally when that happens there’s some kind of finesse — they don’t just whip out their johnson! Do they??

Evan, is this normal now? Is this what guys do? What should I do or say when this happens? I know it’s not just me, because my friends are having the same experience with the random penis pictures. Any clarification or advice, or just explaining this odd male behavior would be appreciated. Thank you!
—Darcy

On behalf of all men, I’m sorry.

I wouldn’t text a cock shot to a stranger in 1000 years, so I may not be the best person to explain this, but I’m going to do my best, like the amateur sociologist that I am.

Once again, I will reiterate that, although I was a self-proclaimed male slut from 25-35, my work was done before texting and camera phones became ubiquitous. So this stuff was never an option.

What I’m guessing, however, is that, like I wrote in “Why He Disappeared”, good qualities come with bad qualities.

If you tell him that you’re turning off your phone unless he presses the little green dial button on his, you may incentivize him to step up.

I meant that in relation to men — brilliant men are often difficult, handsome men are often entitled, etc. But it also applies to technology.

For example, the Internet is great, but it’s also caused the polarization of our politics, tons of misinformation, and an endless time suck.

Same with cellphones. It’s very convenient to have everyone you’ve ever met accessible through the Facebook app on your iPhone. But that means that you’re highly accessible, never unplugged, constantly distracted, and a lot more likely to crash your car.

When we look specifically at the use of cellphones during dating, I’ve frequently stated that texts largely signify one thing: “I don’t want to talk to you; if I did, I would be calling you right now.”

There are many people who use texts the way I use emails — to send frequent communication throughout the day that suffices as a conversation. I never talk to my own assistant on the phone. It’s all email. And it works for us.

The difference is that it’s highly impersonal as well. Quite conceivably, a man can be texting with five different women at the same time and none of them will know the difference. There’s no time investment, emotional investment, or true information exchange that comes with a series of back and forth one-liners. Which is why, even if texting is ubiquitous, it’s still an objectively SHITTY way of building a relationship. Keeping in touch with a boyfriend? Great. Getting to know someone new? Terrible.

Men look for sex and find love. They’re leading with the sex part.

What does this have to do with you and your many penises, Darcy? Not all that much, admittedly. I think I just wanted the opportunity to state in public that we’re not going to be able to put the genie back in the bottle. Texting is here to stay. And if you’re a woman who values herself and wants a man to make a more personal investment in you, it’s your job to show him how. Otherwise, he’s gonna keep you as one of a half-dozen women on his low-investment texting roster.

You deserve more than that, and you can get it — with the right guy.

If you tell him that you’re turning off your phone unless he presses the little green dial button on his, you may incentivize him to step up. But don’t keep rewarding men who think that this type of behavior is okay. They’ll exploit it for selfish reasons — not evil — just selfish — and you’ll never get what you want.

As for why men send their penis to you? Two reasons:

1) Men look for sex and find love. They’re leading with the sex part. Somewhere in their primitive reptilian brains, they think this is a good idea. Objectively, it’s not. I’ve never met a woman who was turned on as much as she was creeped out.

2) Men assume falsely that because they would like to see a naked picture of YOU, that you MUST equally crave seeing a naked photo of them. This is probably the soundest psychological premise I could put forth to explain something so patently stupid. “I showed you mine, you show me yours!” or some such nonsense.

What they don’t know is that while most women appreciate a good body — and quite possibly a hard cock – you are really turned on by his wit, his intellect, his drive, his warmth, and his strength. These are the qualities that make you want to be with him sexually, not vice versa.

And so, Darcy, any man who leads with his penis — as you pointed out — isn’t necessarily a bad human being, but he is definitely someone who doesn’t understand what makes women tick.

I allow for many mistakes in the early phases of dating, but think that a penis text is a perfectly reasonable reason to dismiss a guy.

I wouldn’t even want to know what he thinks is appropriate to send to you after he finally meets you.