Men Are Being Honest. You’re Just Not Listening.

Men and women have different communication styles and often talk past each other. But that doesn’t mean that every guy who sleeps with you and doesn’t want to commit is playing manipulative mind games.

Too often, men have sex first and figure the rest out later. That means there will be signs that he likes you and signs he’s no longer interested. He may even regret sleeping with you. The only way to tell? Pay attention and acknowledge the obvious signs when they’re right in front of you.

ARE YOU READY TO FIND LOVE?

I take my job as your personal trainer for love very seriously.

I try to honor and respect every woman who reads my emails and offers advice that is honest but not too brutal.

But I have to admit, from time to time, I get an email that makes me roll my eyes.

The most recent one was as mercifully short as it was inane. All it said was this:

“What does it mean when a man says he doesn’t want a relationship with you?”

To the best of my knowledge, this email was not a joke, but it had me thinking about other obvious questions that had only one possible answer.

–“What does she mean when she says she’s not at all attracted to me?”

–“What does she mean when she says she’s been faking her orgasms with me?”

–“What does she mean when she says she’d rather jump out of a moving car than go out on another date with me?”

Now, to be fair, most women don’t give men such rude, point-blank answers.

What do you actually do instead?

You don’t return his calls in a timely fashion.

You date other guys until you find one you like better.

You may go out with him again, but you’re not all that into it.

In short, to keep the peace and avoid conflict, you either do the slow fade (not calling him back immediately), or you continue to see him with reservations about your attraction and excitement.

Are you lying to him? Are you trying to hurt him? Are you a commitmentphobe who has no interest in marriage? Are you fickle and always looking for someone better?

I’m guessing the best answer is no to all of the above.

We feel the same way as you. Except you have trouble seeing that.

Men don’t have to commit to you to get you in bed.

All men have to do to get you in bed is be cute, funny, tall, smart, and successful.

And if that’s the case, and we sleep with you based on attraction alone, regardless of whether we have actual FEELINGS for you, it tends to get a little dicey.

This is not me DEFENDING men; this is me, EXPLAINING men.

Listen, we’re just as shocked as you are when you sleep with us on a second date.

But, as you know, this doesn’t mean we want a serious relationship with you. It just means that we were having fun, we were tipsy, we took a chance, and we scored.

Understand that unless he REALLY likes you the second you leave, he’s thinking about how he can get out of this.

Understand that he DOESN’T want to hurt you.

Understand that he DOESN’T want you to fall in love with him.

Understand that he DOES want to keep sleeping with you because it’s in HIS self-interest.

And understand that everything he does next is designed to keep you INTERESTED in him without allowing you to fall in LOVE with him. 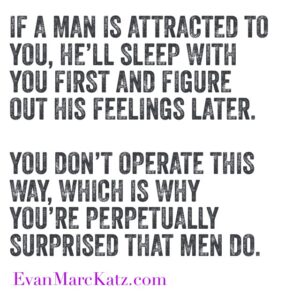 If he’s excited about you and wants to start a committed relationship with you, he’ll call you the next day to say, “I had fun. When can I take you out to dinner this week?”

LISTEN TO LOVE U PODCASTS

Signs He Doesn’t Want a Relationship With You

When a guy doesn’t want to sleep with you again and is already planning his exit strategy, he’s not going to say, “I think we made a mistake. Good luck in life.” He’s more likely going to do something like this:

– A one-line text to follow up.
– A few days of silence afterward because he doesn’t want you to get attached.
– Another text a few days later to say he’s thinking of you, but he’s been busy.
– A text a week later at 9 pm to ask what you’re doing right now.

If there have been no phone calls or dates where he takes you out and starts spending time (and money) on you, guess what?

If there have been no phone calls or dates where he takes you out and starts to spend time (and money) on you, guess what

And your guy is trying to have self-control and find that delicate balance of keeping you in his sex life without you falling hard for him and building a deeper emotional connection.

This is why I’m saying that most guys are being honest with you.

He’s mostly keeping in touch with texts and hoping that you coast on your attraction to him without ever second-guessing his lack of effort.

He hasn’t lied to you. He hasn’t promised you anything. He hasn’t done anything after sleeping with you that indicates that he wants a serious relationship with you.

So, reward this kind man for trying to protect your feelings by…

CUTTING HIM OFF ENTIRELY.

“It’s been fun knowing you, Dan, but I’m looking for a boyfriend, not a sexting buddy. Best of luck in the future.”

He’ll do one of two things:

1) Pick up the phone and call you because you have a burgeoning relationship that’s worth preserving, and he can’t stand to let you go.

Or, in all likelihood…

So stop blaming them for sleeping with and texting you.

If you start listening to their silences, you can finally hear the whole truth.

APPLY TO LOVE U
Tweet
Share4K
4K Shares
DO YOU WANT TO FIX YOUR BROKEN MAN-PICKER?
Click Here To Learn More