Home > Blog > Chemistry > This Guy Loves Talking to Me, But Does Not Want to Be My Boyfriend 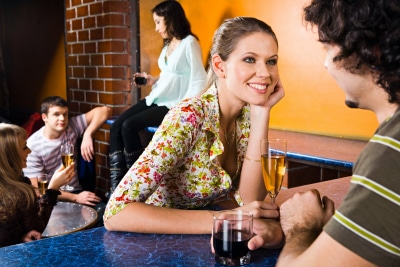 I met a guy I really liked, whom I was physically attracted to, whom I had a lot in common with intellectually and creatively (we both write). We almost slept together. And then he stopped being flirtatious, but continued to contact me via email and text regularly, talking about film and writing.

I had a feeling he wasn’t interested in me other than as a friend, and gave him many openings for him to tell me so, but he never did. When I confronted him on the phone, he said he’d need a few days before he could tell me what was going on. This sounded so obtuse that I figured it had to be something more complicated than that he was seeing someone else. Two weeks passed, and he finally told me that that was the case – he’d been seeing someone.

As I mentioned at the beginning, this is not the first time this has happened to me. So, what gives?

I had always thought that the ideal girlfriend/boyfriend is someone whom you consider a best friend whom you also want to sleep with. Am I wrong? If he treats me like a best friend, and also desires me, what’s missing?

Now I say this without knowing his side of the story. I say this despite your claims that he’s attracted to you. I say this because when you’re grasping for answers as to what went wrong, you deserve a logical answer.

So here’s my logic:

Most men just need to know that you have a pulse.

It’s easy for most men to find a woman that they’re attracted to.

It’s much harder to find a woman who we enjoy talking to, who we pay attention to, who we want to share our ideas with. In fact, most single men who value those traits complain that it’s the main reason they’re still single. Lots of women are hot. Few are hot and interesting.

Thus, if you’re meeting all of his deeper desires and he STILL chooses not to lock you up as his girlfriend, it stands to reason that there’s something fundamentally missing. My guess is attraction.

This may fly in the face of what you’ve experienced with him, so let me explain further.

Most women need to be attracted to a guy AND have feelings for him to take him home. Most men just need to know that you have a pulse. …

In other words, we don’t need attractive or interesting. We need “available”. Attractive is a bonus. Interesting is a fantasy. And that’s where you threw this guy off his game, Robyn. Because you ARE interesting. Because he really DOES like you. Which explains why he wants to get the benefits of your friendship, without any of the obligations of committing to you sexually.

This is confusing to many women because you wouldn’t act the same way. As Alison Armstrong points out, “Men are not merely hairy women”. Stop expecting them to act as you would.

When I was dating prolifically, I hooked up with lots of strangers who I may or may not have been attracted to. Why? Because they were there. The few women I actually LIKED, I treated with more respect. If I got together with them, I didn’t go as far, and quickly downshifted into friendship when I didn’t feel the attraction.

I knew from my own experience that I couldn’t legislate attraction.

If what I’m saying is true (and I don’t know it is), I acknowledge it’s a bitter pill to swallow. Attraction’s a funny thing. It’s not always correlated to looks or body type or symmetry. While many people are swayed by the Maxim aesthetic, if you look around at the world, most of us fall below that bar. Thus getting upset that some guy isn’t attracted to you is a futile exercise. Same as some guy getting upset that he’s not your cup of tea. Believe me, it happens to all of us.

Years ago, I remember being told by a highly anticipated JDate (PhD student, thin, big boobs) that she loved talking to me but didn’t feel any attraction. I was devastated — for a day — until I realized that there was nothing I could do about it. I knew from my own experience that I couldn’t legislate attraction.

I’m sharing my personal experience with you, Robyn, just to let you know that being “rejected” because of chemistry is no crime. It’s a universal — and universally painful — experience. But I think it’s better to contend with the facts than to search for some hidden meaning as to why this guy with whom you share a deep connection isn’t reciprocating.

My theory is that it’s not that deep at all — in fact, it’s probably skin-deep, at best.