This blog post elicited a fair amount of heat, and it covered a topic I dealt with recently in my free newsletter: the value of chasing white-hot chemistry with a person whose looks are a “10”.

Now, before we dive into that, I want to state 3 important disclaimers:

Understand the rules of dating according to dating coach Evan Marc Katz
Learn what you should be looking for in a partner
Hold out for a “10” or be okay with a “7”?
Maximize your chances of finding the person you’re meant to be with

I say this because these are the things people invoke when discussing this – and it’s not like I’m unaware of them. However, the exception doesn’t disprove the rule.

“Rules” are rarely my opinions – more often, they are observations about how the world works, like:

I observe this frustrating reality and point out why it happens and what, if anything, you can do to counteract it. While I’m an emotional guy, my advice is based on logic and evidence.

Learn what you should be looking for in a partner

If something I said hits you emotionally and rubs you the wrong way, that’s fair. It still doesn’t negate that my observations are just that – observations.

So, if I am to observe that a disproportionate number of “10’s” are:

Then, you might say, “Maybe…but I know this one girl who is gorgeous and sweet”. And you’d be right. It still doesn’t change that most 10’s are problematic partners.

Most hot girls are crazy, that’s for sure, but I wouldn’t advise anyone to date a 7. I say go for the 10 that’s awesome on the inside, too.

They’re out there, and you just have to look around and be the man that’s worthy enough to get with that gal. If you fall short, look in the mirror, and make the changes that make you attractive enough to land a 10/10.

Well, I have to disagree – vehemently – on several levels:

Most men, in particular, don’t date “down”; they all want to date “up.”

2) If you hold out for the 10’s…and every other woman holds out for the 10’s. But the male 10s want the female 10s… doesn’t that mean that pretty much every woman ends up not finding a partner?

It’s like saying everyone should hold out for a $500,000 salary because that’s what you’re WORTH. Well, if there are only a few thousand of those jobs, there’s going to be a LOT of unemployment. That is unless someone compromises – and finds a lower-paying job (a 7) with much better benefits and quality of life.

3) If the average guy is – logically – a 5, he usually thinks he’s an 8…and should be dating a 10. Yet women who are 10’s have, literally, EVERY single man they meet hitting on them.

I can’t think of a better explanation of the fundamental flaws of online dating than this phenomenon. You have a 1-1000 chance of landing a 10, tops.

4) The most crucial reason that chasing 10s is a bad idea is that, when you get right down to it, you probably wouldn’t want to keep them.

Chasing looks and chemistry is like a sport. There’s the rush of the chase, the thrill of victory, and the smugness of showing off your hot catch to all your friends – for a moment.

But what happens when you GET the tall, dark, handsome, wealthy, educated, sophisticated, world traveler/self-made millionaire?

Guess what? He’s probably just not that into you.

And so, you never really GET George Clooney. Or James Bond. Or that guy you’re lusting over right now.

You’re just renting him. And you’re merely overlooking his considerable flaws because of how hot he is.

Guys do the same thing with women, I assure you. The most tempestuous relationship I ever had was also with the hottest woman I ever dated – so hot that she had to hide her profile on Match.com to stem the tide of emails.

I held on for four months of hot sex and bragging rights – mixed in with innumerable times of being insulted, emotionally abused, and left at restaurants, parties, and weddings.

The key is to break the cycle. Stop chasing looks first.

Yes, attraction matters, but seriously, it’s a short-term high. You’re looking for a relationship to endure for 30 years.

Do you want to spend 30 years on eggshells because the hot guy or girl is being selfish or doesn’t let you know where you stand? Go ahead. 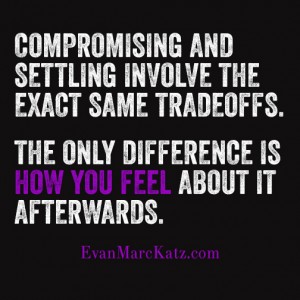 But if you want to find something healthy and enduring – and STILL have great sex – try going for a 7 in looks and a 10 in every other area—kindness, warmth, intelligence, wit, consistency, effort, generosity.

These things matter when you’re 50 – far more than whether your partner holds up next to a 26-year-old Maxim or GQ model.

It’s easy to say you’ll never compromise, you’ll never settle, and you’re going to be the one who finds the “perfect 10” – the Rhodes Scholar/ Supermodel/Top Chef. Good luck with that.

It’s easy to say you’ll never compromise, you’ll never settle, and you’re going to be the one who finds the “perfect 10” – the Rhodes Scholar/ Supermodel/Top Chef. Good luck with that.

Most 10’s never developed the life skills that average folks do – which is why, on the whole, they’re not going to be as loyal or thoughtful or empathetic. If that’s okay with you, because, hey, you just can’t help what you’re attracted to, then I wish you good luck.

Just don’t be too surprised if everyone else “compromises” their way into a fulfilling relationship while you keep chasing a dream that never has a happy ending.